stories about girls who play outside

Yoga. Surfing. Retreat. Bali. Those four words should conjure up images of peace, palm trees and perhaps some cheeky Pina Coladas, right? So why am I a dragging myself out of bed at 5.30am, every muscle aching, with only a cup of herbal tea for my efforts?

Don’t be mistaken – when the whitewash is grinding your face into the sand for the umpteenth time, or you’re lurching into yet another sweaty sun salutation, no amount of island bliss is going to disguise the fact that, together, surfing and yoga are  hard work. And when alcohol, meat and men are all off the menu, that quiet, pre-dawn cup of chamomile is the closest thing you’ll get to a guilty pleasure.

I’m in Balian, a sleepy surfers’ paradise about 50km from Denpasar on Bali’s west coast. Nestled on  the banks of the Balian river and overlooking the rugged Bali Strait, Balian is a world apart from the traffic and touts of Kuta and Legian, but still boasts some challenging breaks for seasoned and novice surfers alike.

Greeting this ungodly hour with me are the eight other women with whom I’m sharing this slightly masochistic, yet perversely enjoyable seven-day experience. Aged from our mid-twenties to late fifties, we’re all here for slightly different reasons – to improve our surfing, work on our yoga or, as one of us so beautifully puts it, for our “annual tune up.” Try total engine overhaul.

Our group leader, surf coach and occasional whip-cracker for the week is Belinda Wehner, who runs Tidal Dreamings Surf and Yoga Retreats – global ‘surfaris’ for women and couples that combine surf lessons with yoga, meditation and a good dose of clean living. A self-confessed soul surfer who’s taken on some of the world’s trickiest breaks, from Costa Rica and Hawaii, to Mexico and the Maldives, Belinda’s mission is to show women in particular that surfing isn’t just a pastime for chest-thumping adrenalin junkies, but a way of life that enriches the body, mind and soul – hence her very Zen take on this traditionally macho sport.

“For me, yoga and meditation are an essential part of surfing,” she explains. “On a physical level, you need to be doing stretching and unwinding because surfing is really explosive and demanding on your body. But, mentally and emotionally, it’s also really important to balance the nervous energy of being out on the water with time to calm and refocus the mind.”

The benefits of yoga for surfing are no secret – nine-time world champion Kelly Slater swears by it, as does ‘80s champ Tom Curren. And according to our resident yogi on this trip, Georgie Wilczek (who has developed a yoga and Pilates program specifically for surfers), the ancient Eastern practice is great for that bane of surfer bods – the creaky lower back. “Surfers tend to come into a lordosis (swayback) position when they’re paddling on a board, which, over time, can lead to pain and injury,” she explains. “A lot of the poses I teach to surfers involve them drawing their pubic bones forward and engaging their core muscles, which helps protect and stabilise the lumbar spine.”

As we shake and sweat our way through one of Georgie’s gruelling, yet undeniably invigorating, 90-minute sessions, it becomes clear how complementary the two activities are. I wonder if it’s an accident that so many classic yoga poses emulate surfing positions and moves so closely. (Did Indians and Polynesians cross evolutionary paths, perhaps?) 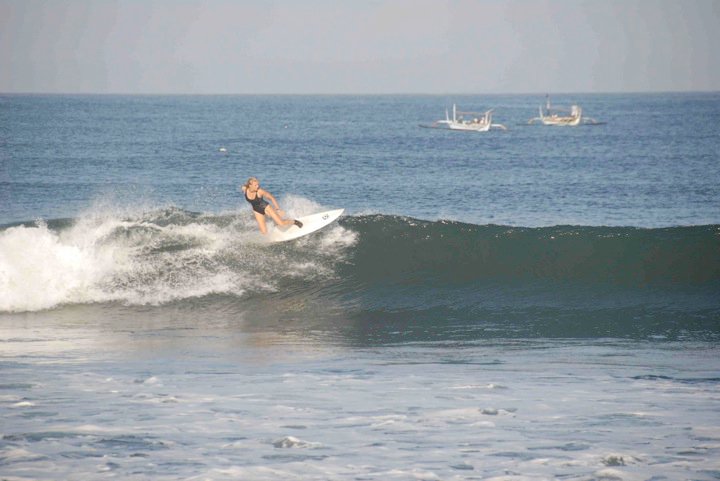 As I stand in warrior pose (feet apart, arms outspread, a steely glint in my eye) I imagine I’m cruising into shore on my board, the defeated ocean in my wake; in plank pose I’m poised and ready to pop up to my feet as a the perfect wave surges up behind me; and in four-limbed staff pose…well I actually feel like a tortured insect, but you get the idea. By the end of the week, my yoga mat and surfboard are one and the same. And while my muscles are fatigued and sore initially, by retreat’s end (and with the help of some criminally cheap Balinese massages) my surfing has improved markedly, and I’m a sickening picture of health and wellbeing.